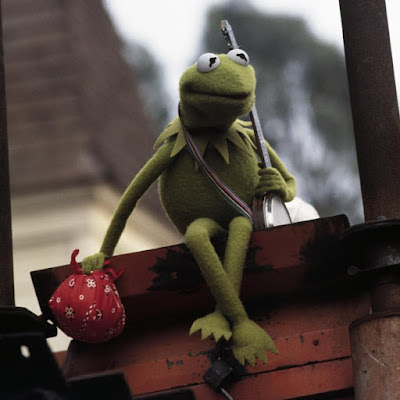 40 years ago movie audiences and Muppet fans were treated to "The Muppet Movie" and the world was introduced to Kermit's big-screen anthem, "Rainbow Connection."

I've sung this song a few times in my years as a puppeteer, Muppet fan and banjo player, although it wasn't this song that sent me down the banjo path. The song is tied to many personal memories; some sad and some sweet, which seems appropriate for a Paul Williams song.

Much like the Frog in the film who left the Mississippi swamp with a bindle stick, a banjo and a dream, I left rural Alabama (by way of Atlanta) with 2 suitcases, a banjo and a little money in my bank account seeking that "rich and famous" contract. My story turned out more like Emmet Otter's than Kermit the Frog's, which is still better than selling snake oil. Both characters have Paul Williams songs in common, too, and you can't go wrong there.

Posted by Puppetsandbanjos at 4:42 AM