CD Release Party and the Start of Summer Tour! 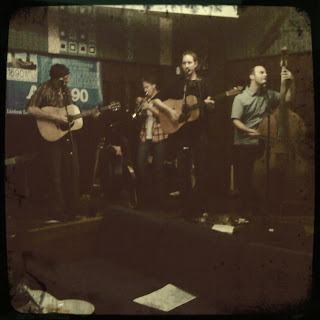 Photo by Richard Parsons
Banjolicious had a GREAT CD release party at Twain's bar in Decatur. I was joined onstage by some amazing Atlanta talents: Will Robertson (upright bass, vocals), Matt Phillips (mandolin, cornet, tenor guitar), and Rhett McAllister (guitar, keyboard, vocals). It was great to see so many friends come and show their support for us and my new album, "A Year and Some Change." If you haven't gotten yours yet, there are several ways to get one:
CDbaby.com (It'll be listed there soon), Decatur CD (exclusive Atlanta retailer), and through me directly. Here are some shots my cousin, Stephanie took at the show: 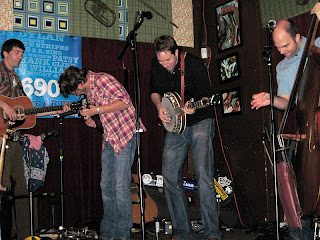 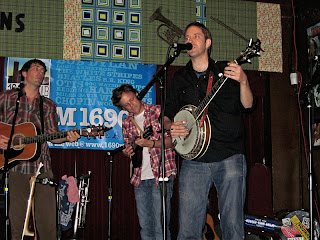 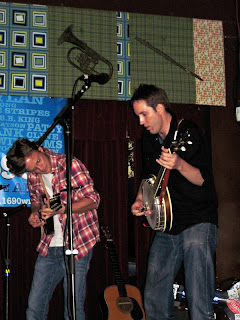 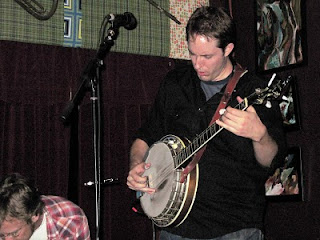 My summer tour of puppet shows kicked off this past weekend with three shows in Orlando, FL. On Saturday, I had the pleasure of performing two shows of "Billy Goats Gruff and Other Stuff" at Pinocchio's Marionette Theatre. On Sunday, I performed a rather soggy version of the same show to a drenched audience at the Orlando Fringe Festival. Thankfully, puppets and audience members were sheltered by tents, but rain can be very determined when it wants to be. As if the weather acted out of irony, the monsoon-ish rain began just as my show started and cleared up just in time for me to load my gear into my van. During the storm, I performed to a "captive" audience. They weren't going anywhere as their tent was the only dry place on the grounds. 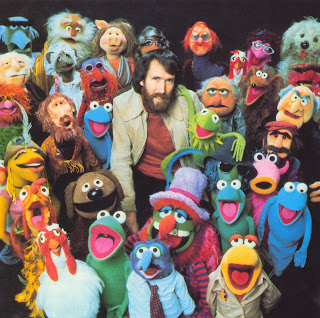 It seemed like a regular day for me. I woke up and got ready for the day. Stood out by the mailbox to wait for the school bus as it plucked up children from their homes and driveways along a rural Alabama route. I remember the sensation of riding up and down bumpy dirt roads that wouldn't get paved until years later. I went to my 7th grade classes. It was a normal day. Until a message from the office told me that my father would be picking me up from school. He only did that if I had to go to art lessons on Tuesdays or get a haircut at the local barbershop, run by two old men that were about the same age as the dirt roads. I really didn't think much of it other than it was unusual and I was probably happy that I wouldn't have to ride the bus home.

I got in the car and we were about half of the way home when Dad looked over at me and told me "Jim Henson died today." I thought he was kidding. Surely, it couldn't be true. Dad's brother, Larry, a doctor in Birmingham, had heard a news report and called to tell my father. And my father wanted to be the one to tell me this news. Which was, and still is, his way. Because he knew the impact that news would have. He was right.

People called the house that night to ask my parents if I was alright. I mainly sat glued in front of the television watching every news report or entertainment magazine show that ran clips of Jim's work. In a sort of ironic way, I saw more of Jim's work because of his death than I did when he was alive. The Muppet Show, though still barely in production when I was small, only aired in re-runs on a UHF station, which ran them at 5:30 on Saturday mornings. I saw Fraggle Rock during the weeks of summer vacation when I'd go visit my grandparents in Birmingham. By some cable company fluke, they got HBO, which meant I usually got to see two weekly broadcasts of Fraggles, which my grandfather called "Fried Frogs."

Going to school the next day was hard. I had very sympathetic teachers. And some very inconsiderate classmates who only wanted to know if I had cried. To a normal 7th grader, the Muppets weren't supposed to matter much, they were kid stuff. They were watching the A-Team (as was I) and sneaking into movies they were too young to be allowed. And Jim Henson certainly wasn't someone they'd paid much attention to. But he was my hero. His work inspired me to never let go of my imagination. It allowed me to gain a bigger sense of the world around me. I was not locked into life in a small Alabama town. My imagination and puppetry were vehicles to a way out. I can't say that my classmates didn't have an effect of me. But I can't begrudge them now, either. They just didn't get it. Thank God my teacher's did. Many of them encouraged and supported me as I started the journey of becoming a puppeteer, following the call of a dreamer in the footsteps of a man I revered.

A year ago, a friend of mine told me he had a gift for me but didn't want to tell me what it was. An envelope arrived by mail, about the size of a CD jewel case. I opened it and saw the label: "Jim Henson Memorial Service." Well, I didn't rush right over to the DVD player and pop it in. I felt strange, a bit uncomfortable holding that disc in my hand. I felt like I was holding something that was very private and to watch it would make me a voyeur. I also knew it wasn't going to be light watching. One night, when I had no commitments or other distractions, I watched it. Unknowingly, my friend had allowed me to do something that I had not allowed myself at 13 to do: I cried and I mourned the loss of a man who meant so much to me, despite the fact that I'd never met him. I was able to grieve. Granted there were many more layers of life added on that made the experience all the more poignant, but the essence of that teenage boy I used to be found a safe place to let go.

Were it not for Jim Henson, who knows what I would have become. But because of him, I am a puppeteer who has devoted a young lifetime to following his dream, making friends and having adventures that often feel beyond real. To inspire, to entertain, to imagine and create: these are the lessons Jim taught me. 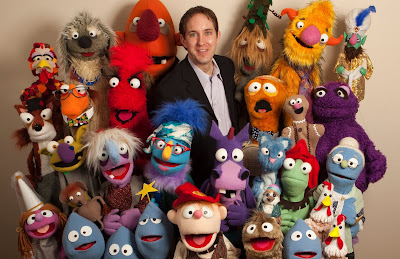 Posted by Puppetsandbanjos at 9:05 AM 2 comments:

Entering the World of Etsy 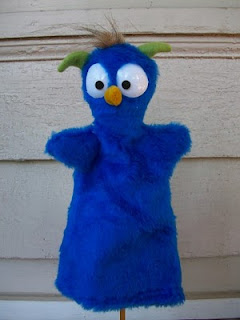 For some time now, I've known about Etsy.com, a website devoted to selling the creations of crafters and artists from all over the world. And also for some time, I'd think to myself "I need to put some of my stuff on Etsy." Well, its finally happened. I started creating "Little Beasties:" hand puppets designed for children. These are meant to be played with and loved by children of any age. I hope they unlock some child's imagination to create and play. Here's a few Little Beasties: 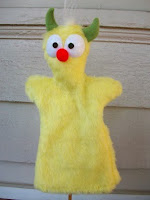 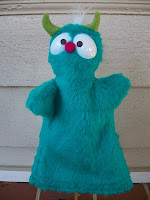 And here's the link to my Etsy store: http://www.etsy.com/shop/AllHandsProductions