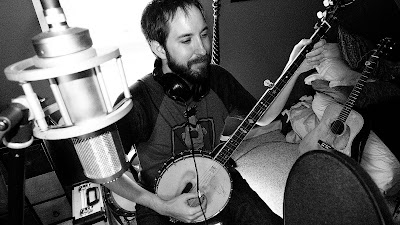 As this blog is entitled "Puppets AND Banjos," I'm going to remedy the lack of banjo topics right now.

I started playing music after I got out of high school and began hanging out at a coffee shop called Southern Lights in Fairhope, AL. There were a lot of singer/songwriters who passed through town, usually on their way to Florida. I bought a guitar and started learning Bob Dylan songs and subsequently got into folk music. It wasn't long before I discovered Pete Seeger's recordings and was smitten with the sound of his banjo. I did some research into Pete and learned that his banjo differed from the common, standard banjo. Called a long-neck banjo, it has three additional frets, allowing the banjo to be tuned to a low E (standard banjos tune to G). Thus, my quest to find a long-neck began.

I was a college student at this time, attending Troy State University on a scholarship. The Internet was still new and shiny. Dozens of students crowded into small computer labs to send emails and surf the web. While surfing one day, I discovered the website of Elderly Instruments out of Lansing, Michigan. I was looking at their selection of banjos and saw my heart's desire: the long-neck banjo I had always wanted. Now, granted, it wasn't a Vega, the brand that patented the design of Pete's banjo and became the high-end dealer of quality long-neck banjos (with tubaphone tone rings). But it was a long-neck, nonetheless. Money was an option, though, and at $275.00, it seemed out of financial reach. 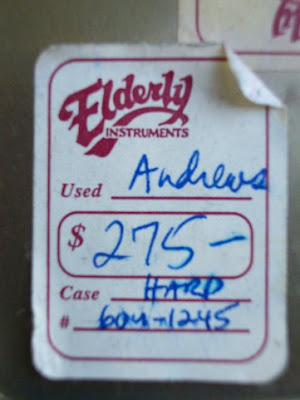 It's also worth noting that while I was searching for this banjo, I had an epiphany of sorts. I was about 19 at the time and had already had several experiences of trying to track down some rare something-or-other. It then occurred to me that life is a series of quests: the trying to find something, be it a physical object or an abstract ideal or concept. I began to get the sense that the adventure lay in the search itself, not in the actual obtaining of whatever was being sought after. But enough philosophy. Back to banjos.

With a little money help from the folks, I ordered the banjo. My parents brought it to me while I was on tour with Pied Pipers, Troy State's touring children's theatre company. I was thrilled and sat in my hotel room for hours setting up the bridge and trying to get the intonation just right. Thus, my relationship with this Andrews long-neck banjo began. It quickly became my main axe and most of my early songs were written on that banjo. I made three albums with it. This is where Mike West comes in the picture...well, actually, let's back up a minute. 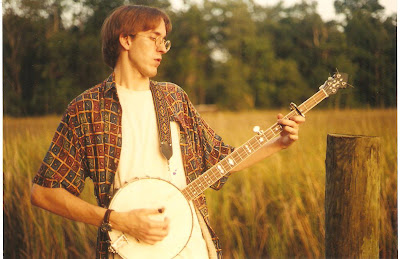 Here we are, in 1998 on the banks of the Magnolia River in Alabama 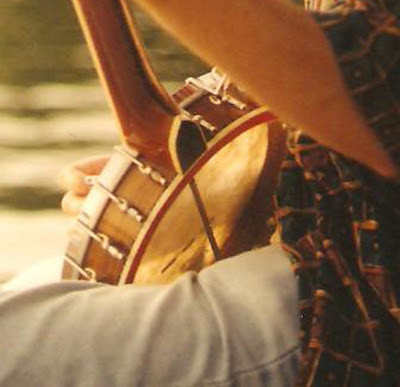 Check out the fancy red finish around the rim of the pot!


During the time I was discovering all this folk music, I had become a regular fixture at Southern Lights Coffee House because of a 15 minute puppet routine the owner let me perform during the musicians' set breaks. One of the acts that made frequent appearances was Mike West from New Orleans and everyone made it a point to tell me how I needed to catch one of his shows. Finally, the stars aligned one weekend while I was home from Troy. My thoughts about the banjo and songwriting were changed overnight. At that point, I had never seen a live banjo player, I'd only heard recordings. Seeing Mike play was a revelation. That night, a friend dropped Mike's latest CD in my tip hat after my puppet act. "Redneck Riviera" became my banjo teacher and I listened to it incessantly.

And not only did Mike enjoy my puppet routine, but he invited me up to get the puppets to sing along with one of his songs. We became fast friends. 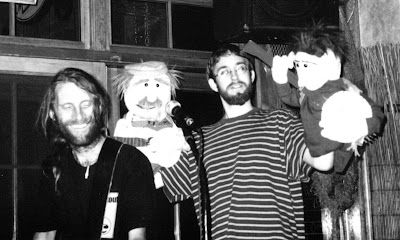 That's me and Mike at the Gulf Coast Coffee Merchants in 2003 with Slim and Zeke, better known as The Boomerangs. (Photo by Brian Meece)

Up to this point, I hadn't really given much thought to writing my own songs. I had no idea what I would write about. Mike showed me that you can write about anything and everything. He wrote a lot of songs about his neighbors and neighborhood in New Orleans' 9th Ward. So, I started writing songs about my own experiences with titles like "Soggy Nachos and Cold Coffee." Well, every journey begins with a first step, I suppose.

The next time Mike passed through town, he was kind enough to give me a banjo lesson. It was the only banjo lesson I ever took. He diagrammed out the different roll patterns for the right hand and drew a diagram of how to hold your right hand while playing. Granted, most of it was (and still is) gibberish to me. I still can't read tablature and most of what I picked up from Mike, I learned by ear from his shows and his albums. I played him a few of my tunes and he encouraged me to keep writing.

I started graduate school at the University of Connecticut in 1999, which provided the inspiration for a number of the songs on my first CD, "Played By the Rules." I think I made a simple demo tape of the songs and sent them to Mike. He invited me down to New Orleans to make an album.

By now, I'd been playing for awhile. And, like most banjo players, my ear began to wander. Thus, another quest began to find "the sound." If you spend any amount of time with a banjo player, you're bound to hear about the elusive "sound" that every banjo player is trying to find. Some attribute it to the pre-War metals used in Gibson Mastertones, made popular by Earl Scruggs. Some players lean towards warm, thuddy tones, others prefer bright, plinky sounds. It's tantamount to finding the ideal mate: we may not know where to find it, but we know it when we hear it. All this to say, the tone of the Andrews long-neck wasn't doin' it for me anymore. 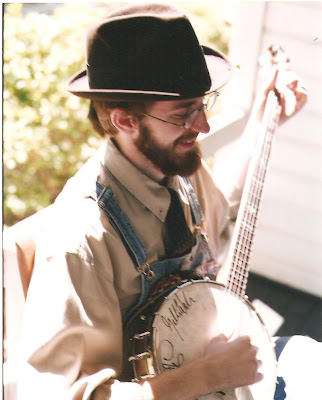 As a sidenote, I should mention that the first clawhammer banjo instruction I got was from Gillian Welch on the Andrews long-neck. I still have the banjo head that she and David Rawlings signed after one of their shows at Zydeco in Birmingham, AL. (photo by Brook King)

In 2002, Mike West and I traveled to Winfield, KS together for the Walnut Valley Bluegrass Festival. In the bluegrass community, there's an understanding that Merlefest is where you go to listen and Winfield is where you go to pick. One afternoon, I was browsing the showroom of instrument makers and dealers located under the stadium bleachers. Near the exit, the Ome banjo company had set up their display. It was there I saw what would become my first exceedingly expensive instrument purchase: a second-hand, custom-made Ome long-neck banjo with tubaphone tone ring. Oh, how I agonized about whether or not to blow almost $2,000 on a banjo. Mike was no help. "I've been right were you are," he said, "but I can't tell you what to do." Well, of course I bought it. I'd found the sound!

Now I had two long-neck banjos. By this point, I was living back in Alabama. When Mike would come through town to play a gig, he'd stay at my house. Seeing the Andrews, he diagnosed some problems with it and asked if he could take it with him and try to fix it up. He learned that the the hole in the neck for the coordinator rod (which connects the neck to the pot) had been stripped, thus causing the neck action to be ridiculously high making playing the strings further up the neck nearly impossible. But, once fixed, Mike had a long-neck to add to his eclectic collection of studio instruments.

Then, in 2005, while Mike and his family were out on the road touring, hurricane Katrina ripped through New Orleans. The subsequent failure of the levee caused the flooding Mike's neighborhood in the Lower 9th Ward. Mike lost thousands of dollars of recording equipment and instruments, my old Andrews banjo among them. Thanks to insurance, Mike set up shop again, though now in Lawrence, Kansas, where the family has traded hurricanes for tornadoes. He picked up right where he left off recording a plethora of singer/songwriters from around the globe.

Earlier this month, my friends Silbin Sandovar and Brian Meece were making a record together with Mike and invited me to come to Kansas to record some banjo tracks. I asked them what keys the songs were in. When they said "F" and "E," I told them I wished I had brought my long-neck banjo since those are easier keys to play in on that particular banjo. "Oh, Mike has a long-neck," Silbin said. "Well, he _used_ to," I said and explained the history of the Andrews banjo.

The next day, I went up to Mike's home studio. On a guitar stand in front of me was a ghost. Or, at least it must have been. It was my old Andrews long-neck banjo. Mike said it was one of the only instruments to have survived the flood. He went on that the neck was a little out of whack, but remembered it had always sort of been that way. After cleaning it up and re-stringing it, it came back to life. As you'll, see its worse for wear, but I never thought I'd see that banjo again, much less play it. But play it, I did. You'll be able to hear it for yourselves when Brian and Silbin release their CD later this year. Details to come later. 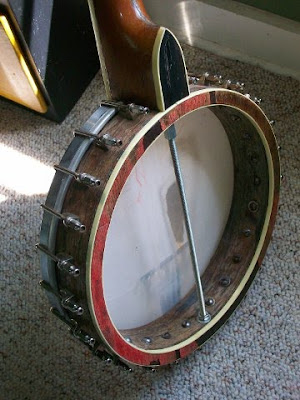 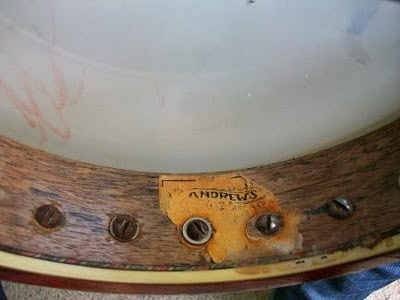 You can see the beating it took.

It's hard for me to believe that I've been a banjo player for 15 years. I had no idea that when I started down this musical road that I would record 6 albums of original songs and would have opened for The Kingston Trio or made an album with veteran Muppeet performer Jerry Nelson. This amazing instrument continues to teach me things and take me along for some wonderful adventures. I owe a lot of thanks to Mike West for his support and encouragement of my interest from the beginning. You can check out his music with his band, Truckstop Honeymoon on their website http://www.blogger.com/www.truckstophoneymoon.com 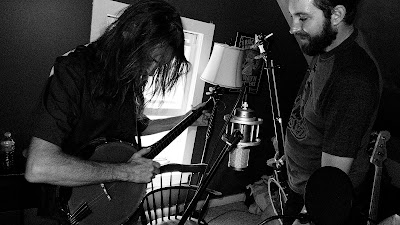 Jedi Master and Jedi Knight. "Pick or pick not. There is no strum." (Photo by Brian Meece)
Posted by Puppetsandbanjos at 3:53 PM No comments: