I hope you all had happy holidays with loved ones around you. And I hope Santa was good to each and every one of you. He certainly was to me.

During the last two holiday seasons ('08 & '09), I spent my time in East Haddam, Connecticut working on a musical adaptation of “Emmet Otter's Jug-Band Christmas,” which Jim Henson originally produced as a television special in the late 1970's. I was lucky enough to work with some of Broadway's finest talents and worked side-by-side with the legendary Paul Williams. I was also fortunate enough to work with the amazing folks at the Jim Henson Company's New York Workshop who created all of the wonderful costumes and puppets for the show. But doing a Christmas show means you have to work over the holidays and in my case that meant being away from my family. Sometimes work is work and you have to take it when you can get it. Plus, the project was too good to pass up. While it was a lot of work and a lot of fun, there were definitely parts of me that missed seeing my folks and sharing the season with them.

For one reason or another, Emmet took a Christmas vacation this past year so I was able to stay in the sunny south during the cold months of November and December. I felt I had reached my white Christmas quota for a while. I did my annual run of “Santa's Missing Mail” puppet shows at the Atlanta Botanical Gardens and had huge crowds for each Saturday performance. I was excited about putting up my own Christmas tree in the house and stringing lights around the porch and front windows. Thankfully, the previous tenants had left the guide nails in place, so stringing the lights was a cinch.

My folks came up to Atlanta for Thanksgiving. My housemate and cousin, Stephanie's parents came down from Spartanburg, SC. Stephanie's sister, Allison came over with her boyfriend, Bob, and we all had a big meal together the Tuesday night before Thanksgiving Day. The menu was cut right from my grandmother's cookbook. All of Mildred Keown's staples of holiday eating were there. Every year my mother tries to match my grandmother's dressing and every year she feels like she's fallen short of grandmother's perfection. It didn't stop us from stuffing our faces.

My parents stayed in Atlanta until Thanksgiving Day. The day before, I pulled out the Christmas tree and all the lights. When we put up a tree in Connecticut during “Emmet,” I volunteered to be in charge of the lights. After graduate school, I had a retail job in a Christmas tree ornament store in an outlet mall in Foley, AL. During the summer. You would not believe the amounts of money people would throw down in July for snowmen and Santa Clauses. But during my time there, I learned how to properly light a Christmas tree. I learned you don't just wrap the string of lights around from the top to the bottom, but you have to weave the strand through the branches, which requires a whole lot more lights, but the pay-off is so worth it. On Thanksgiving Day, I turned on the tree, tuned in to the Macy's Thanksgiving Day parade (selfishly wishing a little that I was on the Sesame Street float) and wished my parents safe travels back to Alabama.

I drove down to South Alabama the week before Christmas, fully ready to be in the holiday spirit. I was already well on my way having been listening to the Christmas music radio stations a full month before the day. During the drive, I thought about our traditions as a family. Since the last of my grandparents passed away three years ago, I didn't feel as though my family unit had established any holiday traditions, per se. I knew mom would have her annual Christmas open house for the congregants of dad's church. She would spend a week preparing homemade confectionery and baked goods for everyone to gobble up. She'd also decorate the entire house, which visitors always admired. Part of this decorating involved placing some of my old toy building blocks in my bathroom at home. She'd spell out “Joy” and “Noel” with these blocks. Growing up, I would always change the letters around so they spelled something like “Noy Joel” or “Ney Jool” or something ridiculous like that. She also put a bathmat in front of the sink that read “HO HO HO”, which I would turn around so it read “OH OH OH.” I knew my joke had been discovered when I would see everything put back to rights. I took great pleasure in carrying on that silly tradition this past year. My mom told me that while I was away doing “Emmet,” my father changed the letter blocks around for me in my honor.

Christmas morning, I woke up to carry out another tradition: that of making Christmas cards for my parents. This is something I've done for a long time and not just for Christmas. Usually on the morning of whatever holiday it happened to be, I would hastily pull out my markers and crayons and fashion a card for one or both of my parents. Sometimes they were elaborate affairs in which I tested my drawing skills. Most of the time they involved some family inside joke. This Christmas morning I got up and sat at the kitchen table with the art supplies I'd brought along, thinking about what to draw. I knew I wanted to draw something a bit more sentimental for my mom and something funny for my dad. For mom, I drew a picture of Kermit the Frog, seated next to a giant Christmas tree and playing a banjo. In the sky, there is a bright shining star amidst a dark blue sky. For dad, I drew a picture of Ernie, dressed as Santa Claus, being pulled in a sleigh by a very annoyed looking Bert wearing reindeer antlers. I wrote my parents a note in each of their cards expressing my love for them and my appreciation for all they have done and continue to do to support and encourage me. 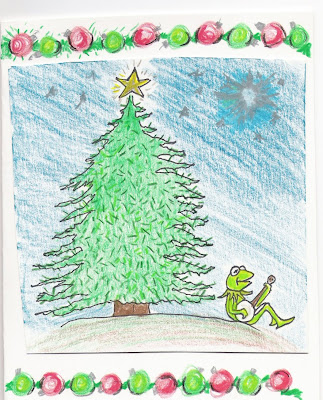 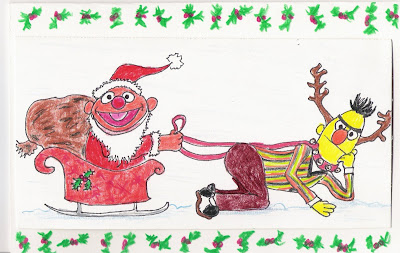 We feasted on Christmas Day with a menu that mirrored our Thanksgiving feast. When our stomachs had settled a bit, it was time for dessert. There are only two things that my father prepares every Christmas. One is Chex Party Mix, which he sent me even during the years I was away living in New York or working in Connecticut. The other is a pumpkin pie that involves a graham cracker crust, a layer of cream cheese, pumpkin filling and pumpkin spice. This gets placed in the fridge until it sort of congeals. With a dollop of Cool-Whip on top, its the perfect holiday dessert (aside from my grandmother's pecan pie) Dad pulled out the pie and we noticed that the consistency looked a little off. I volunteered to taste it. I took about a two-knuckles worth sized bite and immediately spat it out into the sink. My mom took about a pinky-nail's worth and grimaced as hard as she could. “I don't know what I did wrong,” my father said. “I did everything the way I always do!” “Are you sure you used pumpkin spice?” my mother asked. “Yes!” he declared, “I looked at the bottle before I put it in!” I went over to the spice cabinet and discovered two identical spice containers with red caps placed next to each other. One was pumpkin spice. The other was cumin. I opened the container of cumin and discovered what it was that my father had put in the pie. We now refer to it as Bill Stephens' Ney Jool Pie.

We exchanged and opened presents around my parents Christmas tree, which is completely covered with decorations that either she has made or been given over the years. My folks got me an LP to MP3 converter, which I have been using ever since I got it. I also got a night light in the design of the leg lamp from “A Christmas Story,” the viewing of which is another family tradition. Well, at least for my dad and me. Mom hates it. Rather, she says she doesn't get it. Dad and I love it and enjoy going around the house all day quoting it. “YOU'LL SHOOT YOUR EYE OUT!” It drives her nuts. We do the same thing with “O Brother, Where Art Thou?”

I spent the better part of the days around Christmas cleaning out storage. My dad constructed a studio for me when I got out of grad school while I was living in Alabama. It has since become a storage building for all of my past projects and accumulation of stuff. When I would come down to visit, I would tackle a little bit each time, throwing out bags of superfluous rubbish. This trip, I really tackled it and went in with a prize fighter's attitude. It felt good to be at the end of the year and making a big purge; making room for more things to come and more adventures. But most especially it was nice to discover that my family and I do have our own traditions around that time of year and it makes me happy to hope that we will continue to share them together in the coming years. Though, I think we can all do without the Ney Jool Pie next year.

I hope you all had a wonderful season of happy holiday traditions. Here's hoping for a happy and full 2011 with those we love.
Posted by Puppetsandbanjos at 10:45 AM No comments: