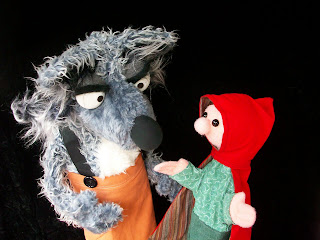 Ten years ago, I created a 40-minute touring show for library summer reading programs called "Billy Goats Gruff and Other Stuff." Originally, "Billy Goats Gruff" wasn't in the show and the show was called "Tales for the Telling." It featured a shadow puppet sequence based on a old folk song called "The Devil and the Farmer's Wife," which I created as a student at the University of Connecticut. "Little Red Riding Hood," was done as a glove puppet piece and I made those puppets in my spare time at UConn. The ideas that became the rest of the show came to me while visiting a friend in Vermont. These ideas included a sequence involving two chickens, a story called "The Two Fame rs" loosely based on "Stone Soup," and a retelling of "The Three Little Pigs."

While touring this show for the first time, I was slated for a three-day, five-show stint at a library in the Birmingham area. After the first show, a very concerned librarian came up to me and requested that we have a chat. Apparently, the "Devil and the Farmer's Wife," the very first selection in the show, was not going over well. "As soon as that devil puppet popped up on the screen, three families got up and left." So, I had to extract it from the show. And for that run, I had nothing to replace it with, shaving 10 minutes off the show's running time. Before going on to the next stop on my tour, I had enough time to create puppets for "Billy Goats Gruff," which is how that story came to be in the show. The title was changed to "Billy Goats Gruff and Other Stuff," when the Center for Puppetry Arts wished to host an 8-week run of the show. They felt that "Tales for the Telling" wasn't as sell-able.
In it's life so far, this show has taken me all across the country. It has been performed 4 times at the Center for Puppetry Arts (two of those by other puppeteers), hosted by the National Festival of the Puppeteers of America in 2005 (where I was utterly humbled by standing ovations from audiences of peers and mentors) and has received one of puppetry's highest honors: an UNIMA-USA Citation of Excellence. I have lost count on the number of times I have performed this show in schools, libraries, birthday parties and special events over the last 10 years.
This summer, "Billy Goats" will simultaneously be running at the Center for Puppetry Arts while I am touring it in library summer reading programs. Thus, a second set of puppets had to be created. Some of the puppets I was using were originals, though most had been rebuilt as they wore out. It was high time a new set of puppets was made anyway. I hired Scottie Rowell, a wonderfully talented puppet builder and costumer to help out. Over the next few months, we rebuilt the entire cast of 15 puppets.
Rebuilding can be a scary undertaking. Once you've become familiar with how a puppet feels or is controlled, it is very hard to recreate that. And after ten years, some of these puppets were well broken-in. There is also a risk that the character might alter because of subtle changes due simply to the fact that hand-made things are unique and impossible to duplicate exactly. Scottie can attest that there were some things I would not accept just because they veered too far away from the original look of the costumes/puppets.
In the end, all the puppets turned out beautifully and are holding up well on the tour. I'm into my fourth week of summer reading programs. It doesn't take long to remember all the little things that make up a tour: the driving (thank goodness for GPS!), fast food (Cracker Barrel is a must), setting up, tearing down and doing it all over again in the same day. Sometimes twice in the same day. So far, there has only been one major mishap. My CD player decided to die right before the start of a two-show day. Fortunately, I had my iPod on hand, but the particular selection of music I was using for the chicken piece was not programmed. So, within a matter of seconds, I had to choose a different instrumental and just pray that it worked. Instead of Benny Moten's "Kansas City Shuffle," I went with Steve Martin's "Pitkin County Turnaround." Nobody knew the difference.
Here are some pictures of the new puppets! 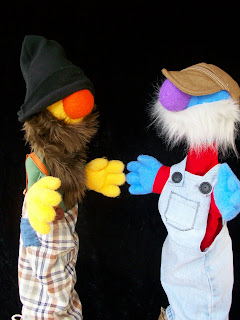 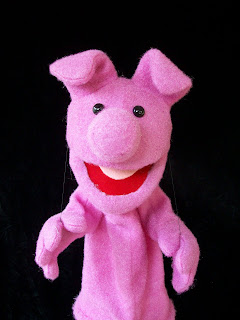 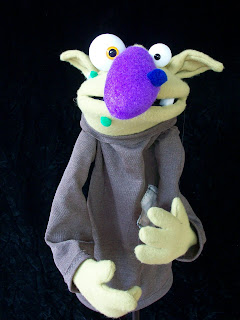 The Troll (who's never actually been given a proper name) 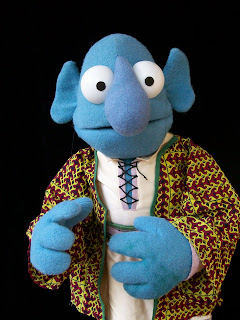 The Magic Genie of the Watering Can 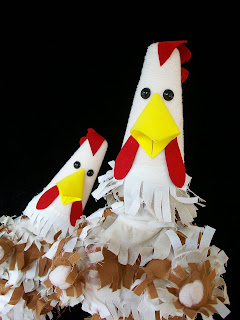 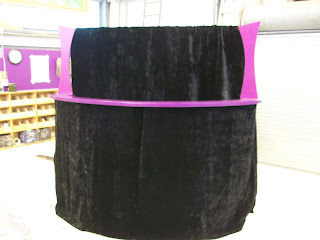 Last, but certainly not least, my new stage!! Designed and constructed by Roy Howington, it is no less than a work of engineering genius. The set up and tear down are just as enthralling as the show itself. Well, I think so. So well made and so pleasing to the eye. I've decided that after ten years, I ought to start looking like a professional!
Posted by Puppetsandbanjos at 12:25 PM 1 comment: