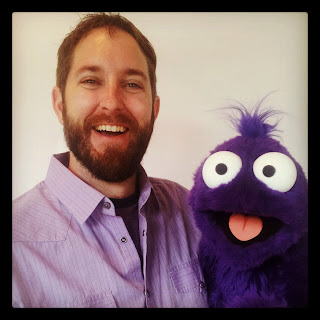 For a puppeteer, there are a lot of fears that can keep you up nights. For instance, there are physical calamities which might prevent the required dexterity of movement, thus ending or limiting one's performance capabilities. Then there are acts of Mother Nature that can have tragic effects: fire (think of the Scarecrow from “The Wizard of Oz”), flooding and so on. Then there are human actions. And this is where my story begins.

Several years ago, while selling memberships at an Atlanta arts organization, I started incorporating one of my stock puppet characters, Norbert, as part of my pitch. I discovered a puppet could lure the attention of a child to my sales table with the parents soon to follow. Norbert was really the bait to hook a sale. It worked beautifully. In the weeks and months that followed, through the conversations he had with children and parents, Norbert's character began to emerge. He soon became my go-to puppet when called upon to interact with the public and even found his way into a role in my Christmas show, “Santa's Missing Mail.” He also was the star puppet on a music video collaboration with singer/songwriter, Kelly McFarling when they performed a duet of “I Want to Dance With Somebody.”

It was no surprise that when  I decided to present All Hands Productions in the exhibitors gallery of the Atlanta Parent Magazine Block Party at Mercer University that Norbert was along with me to attract the attention of attendees. I printed out coloring sheets and certificates with discounted performances, all of which Norbert hawked in his usually silly, puppety fashion. We manned the table from 7:30am until 3pm when I had to dash off to play banjo at a wedding in Kirkwood, on the edge of Little Five Points in Atlanta. Kirkwood is what some might call still a “developing” neighborhood. There are parts where you can absolutely feel safe and others where you don't want to leave anything in your car. As it turned out, I shouldn't have left Norbert in my car.

I left the wedding around 10pm and headed up the street and around the corner on College Ave where my car and several others were parked in a business' parking lot designated for our use during the wedding. I opened my back hatch, placed my banjo inside and then got in the drivers side. A quick look to the right showed that the widow on the passenger side door had been busted out. I got out and walked around and found my denim jacket (covered with Muppet patches) lying on the ground. I looked in the back of the van where all my sound equipment was still in place from where I had packed it from a gig the previous Thursday. Untouched. The glove compartment was hanging wide open, where, I guess, they had searched for a hand gun. I didn't notice anything right off that was missing.

NORBERT! THEY HAD STOLEN NORBERT!

My heart sank to my shoes as I dialed 911. Some folks were milling about across the street and I walked over to ask if they had seen anything. The thieves had not only broken into my van, but also into an SUV parked next to mine. The officer arrived and I knew I'd have to go into the details of what had been stolen. You look perfectly normal when you have electronics or CDs stolen, but how was I going to tell this guy that my purple, shaggy, Muppet-y looking puppet was stolen. The officer was quite understanding, however, and asked “Was it a string puppet or...like..a Jeff Dunham..” He instantly had my respect. The officer gave me a copy of the report paperwork and I proceeded to worry and fret through the whole ride home and on into the night.

Puppeteers know there are two dominant types of attitudes towards puppets in our field: those who have a respect for the puppet and handle them carefully as tools of expression. Then there are those who are “precious” about them; who treat them as living, breathing entities. I liked to think of myself leaning more towards the first, but after this experience, I found that I was really closer to the latter.

When friends, attempting to be consoling, said that I could simply make a new puppet and perhaps improve on the construction and, despite the inconvenience, end up with a much better puppet. This is something I've done as the puppet has worn out. The stolen puppet was actually the 3rd Norbert I've constructed. But, to my thinking, this go-round, I would simply be creating an impostor. Though I might have a puppet that looked just like Norbert, I could make him sound just like Norbert, it wouldn't be Norbert because I would know that he was out there in limbo somewhere, perhaps in somebody's home, or on eBay, or in a landfill. This episode was now part of this character's story. “Precious,” indeed.

So, I did the only thing I could think to do: I made a poster: 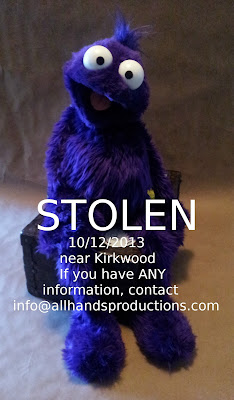 The next morning I played a banjo gig at Big Tex's Cantina in Decatur with John Mickelson, with whom I'd played with the night before at the wedding. After the gig, I told him I was going to drive around and see if I could find him in any of the dumpsters. John said he had to go back to the wedding venue and pick up some equipment and would also give a look.

I hoped that I would peek in and catch a glimpse of purple, shaggy fur. But despite how much I searched, I turned up empty handed.

Then my phone rang.

We drove to the parking lot, the scene of the crime. Behind the parking lot, separating the business from a residence was a privacy fence and a thin strip of wooded thicket area. A thicket area just wide enough for a couple of people to hide in while rummaging through their loot. And that is where Norbert was found. The thief/thieves must have decided they couldn't use a purple puppet and just left him there. So, the most Norbert suffered was being exposed to the elements overnight. 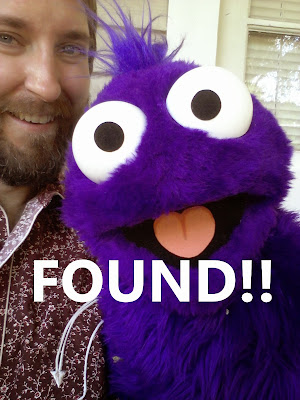 Reunited. It was hard not to be overcome with emotion. I already knew that puppets can be deeply personal extensions of our own personality. This really brought that all home to me. 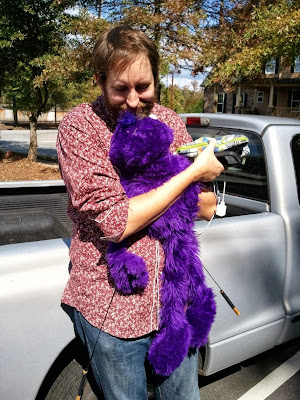