“Nobody reads those names anyway, do they?” Fozzie Bear asks Kermit the Frog as the pair, along with Gonzo the Great, glide in a hot air balloon across our movie screens while the opening credits for “The Great Muppet Caper” appear and fade. As Jim Henson's own credit appears Kermit answers, “Sure, they all have families.”

Being a vast receptacle for Muppet trivia has never really come in useful. Sure, it's a neat parlor trick I can use to settle an argument two friends may be having about whether or not certain Sesame Street characters are gay, correcting someone when they wrongly believe Jim's son, Brian took over performing Kermit or setting them straight when they believe all “The Muppet Show” episodes are now on Disney+. (For the record, Bert and Ernie have never been gay, Steve Whitmire took over Kermit in 1990 after Jim's death and Disney+ has an edited 118 out of 120 “Muppet Show” episodes.

Several years ago, my knowledge (if you can call it that?) would have come in useful when the Center for Puppetry Arts was refurbishing a number of donated Henson puppets that spanned the history of the company. Vito Leanza and Russ Vick had the daunting task of conserving hundreds of puppets, many of which they couldn't easily identify. On the few trips I made to visit them, I just looked around the room and without even thinking about it, named each character and identified the production they were used in (multiple in some cases) as well as their respective performers. Vito and Russ had been combing Muppet Wiki, a sort of search engine for all things Henson related, and had managed to get a lot of information that way. But after my nifty little identification presentation, they all wished I could have come in and saved them a lot of time doing that research.

Fast forward to 2021. Going about a normal (or whatever passes for normal now) July day, I got a message from Bill Jones at the Center for Puppetry Arts. Bill just celebrated his 20th year there, though now he works in the collections division after moving over from production. “Any idea what Sesame Street character this is?” Attached was a faded photograph of a lavender live-hand Anything Muppet that was used in a sketch about “Upside Down.” I immediately knew what it was and attached a YouTube link for the sketch.

This photo was part of a collection donated by Muppet builder, Caroly Wilcox, after her death in 2020. Contained in the pages of photo albums and scrapbooks was a retrospective of her entire career at The Jim Henson Company that began in the late 1960's with “Sesame Street” and involved virtually every production until her retirement. And there were a lot of them. Of course, there were the big projects like “The Muppet Show” and “The Great Muppet Caper,” for which she was the Muppet Workshop coordinator. But there were also smaller projects like “The Muppet Musicians of Bremen,” for which she created puppets and also did some performing. Few know that she also performed on “Sesame Street” in the early days before Fran Brill joined the team as the first female Muppet performer hired by Jim. And there were numerous reference photos of puppets for all these productions and none of them were labeled.

Charged with cataloging this massive resource was the Center's museum intern, Ted, who (poor boy) had his work cut out for him. I think Bill Jones had taken pity on him and wanted to reach out to see if I could be used as a resource to help him. After I passed that initial test from Bill, Ted reached out to ask if I could come in and give him a hand. Naturally, I jumped at the chance to see some rare Muppet artifacts. Peeking behind the Muppet curtain is a lot like peeking behind the Wizard of Oz's curtain, except instead of revealing a layer of disillusionment, you discover more magical layers of wonder and enchantment, at least as far as the Workshop is concerned. Caroly's scrapbooks did not disappoint.

Ted could hardly keep up. He could not type fast enough as I moved from one photo to the next identifying one seemingly random puppet after another. In some cases I started singing the musical numbers they were associated with. Ted must have been terrified or surely thought he was in the presence of a whole other level of crazy person. We whittled his list of about 100 unidentified photos down to about 4 that just stumped me. I even reached out to some Henson veterans and they were equally stumped. But Ted was happy with all we had accomplished and I was thrilled to have gotten a peek into Caroly's worklife.

Fast-forward a few months. Ted reached out again, this time needing help identifying some people in Caroly's photos. Most of these were folks who worked in the Muppet Workshop at various times throughout the years. These were a bit harder for me and I knew I was going to have call in some help of my own. For those I didn't know, I took photos of the photos with my phone and contacted the same veteran Henson folks I had before, who were very helpful in some cases.

But there was one guy. He seemed familiar to them but they couldn't name him.

(Side note: Since I don't have usage rights to share the images of this mystery man, I can't post one to this story, but I made an artist's rendering of one) 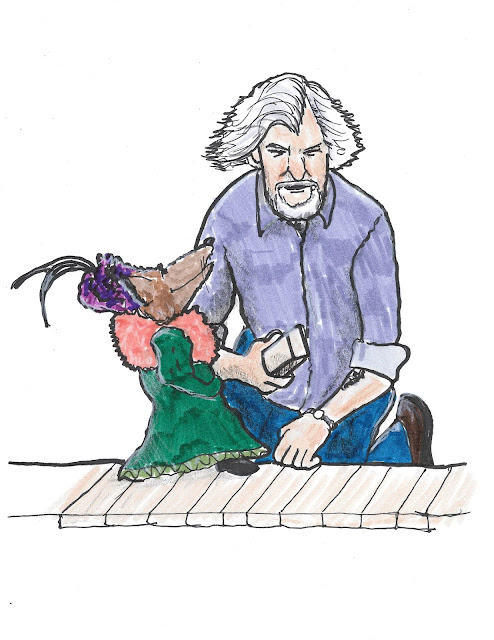 He was tall with wild silver hair and a goatee. He looked like a natural fit for the Henson staff in those days. He was in a photo from 1972 on the set of “The Muppet Musicians of Bremen,” helping Caroly, who was in the costume for Mean Floyd, one of the bad guys.

He popped up again in photos for “Emmet Otter's Jug-Band Christmas,” making some adjustments to the set of Gretchen Fox's dock. If you know the special, you know the significance of that dock.

Both specials were shot in Canada, so it seemed likely he was part of the regular Canadian team Jim used when he filmed up there, which was frequently since production costs were cheaper. Jim was also the sort that when he found people he liked to work with, he hired them over and over again. He was also known to be incredibly good to those people.

It was time to call in the heavy-hitters, which prompted an email thread among Henson Archivist, Karen Falk, Henson Legacy trustee and veteran Muppet designer and builder, Bonnie Erickson, and Fraggle Rock producer, Larry Mirkin. They all looked at the photos of this man and he looked familiar or he resembled this person or that but no one seemed to know exactly who he was. Finally, Larry said he was going to contact puppet wrangler Jane Graydon, who had told him once that her father had worked on Emmet but wasn't on the credit list. So, we waited to hear back from Larry.

The man's name was Louis Graydon, Jane Graydon's father. She said he had worked on a number of Henson projects eventually becoming a Key Grip. In her message to Larry, she revealed that he was also on the team that was responsible for one of the greatest Muppet outtake reels: The rolling drum from “Emmet Otter.”

If you don't know this bit, well, it seems pretty insignificant in the context of the whole special. Ma and Emmet Otter pass by a music store that's being pillaged by The Riverbottom Nightmare Gang and a bass drum rolls out the door past Ma and Emmet and lands on the curb. In rehearsal, the drum had rolled out and done a nifty end-on-end teeter before landing on the curb. But that was just the rehearsal and the cameras weren't rolling. However, Jim wanted that exact movement, became fixated on it and would not give up on lightning striking twice. The crew valiantly tried over 200 takes to recreate what had happened purely by accident. All the while, Jerry Nelson and Frank Oz were trapped underneath the set performing Emmet and Ma above their heads for those over 200 takes. You can see the outtake reel here: (https://www.youtube.com/watch?v=GduZhqftUn8) Louis peeks through the door of Mrs. Mink's Music Shop at around the 4:00 mark.

The mystery was solved! Jane was so grateful to Larry for being in touch and allowing her the opportunity to remember and share her memories of her dad. Now he'll be properly credited in the Henson Archives as well as in Caroly's material at the Center for Puppetry Arts. I was so glad to play a little role in solving this mystery and connecting those dots. As the years roll by the number of folks who were directly involved in these productions dwindles. I think we were really lucky to catch this one when we did. I also feel really honored to know some of that old guard who are still around like Ed Christie, Rollie Krewson, and Bonnie Erickson, all who helped so much on this excavation trip.

All this also puts me in mind of the current fight the members of IATSE (The International Alliance of Theatrical Stage Employees) are undertaking. There are so many people that work behind the scenes of all the content we have been gorging on since the start of the pandemic. Production companies have attempted to turn up the rate of production, mostly at the expense of the teams of people who work incredibly hard to make it all happen on schedule and on or under budget. This has lead to cut corners on safety in some cases or just a blatant disregard for the general well-being and welfare of crew members. It has all finally reached a breaking point and negotiations with union leadership has stalled and a worker strike is likely forthcoming (and justified).

So think about all the work it takes to make a movie or a show that you watch.

Think about all those names you see scroll on your screen.

Think of their families.

And think about Louis Graydon.

Posted by Puppetsandbanjos at 4:54 PM No comments: