It's that time of year again when woodchucks bring out their banjos, tune up the strings and pray to the good Lord above they will win the Waterville talent contest.

In 2008 and 2009, I had the privilege to participate in a musical stage adaptation of "Emmet Otter's Jug-Band Christmas," co-produced by the Jim Henson Company and Goodspeed Musicals. I puppeteered Yancey Woodchuck, who played the banjo live for every performance (no small feat for the puppeteers!); Skippy Squirrel, one of a quartet of squirrels created for the musical version; and Pa Otter, who appears to Ma as a ghost. Paul Williams wrote some wonderful new songs for the musical in addition to the original songs he wrote for the 1979 television adaptation, produced by Jim Henson.

The story of Emmet and Ma started as a children's book by Russell and Lillian Hobban and was a retelling of O.Henry's "The Gift of the Magi." Jim Henson and his talented team of builders and performers lifted the world of woodland creatures out of their watercolored illustrations and realized them in three-dimensions for television. Christopher Gatelli, noted Broadway director and choreographer, had in his mind the possibility of bringing that world to life on the stage.

The colorful cast combined actors in elaborate animal costumes alongside puppets, all masterfully and meticulously created by the Henson Workshop in NY (shout out to Jason Webber, Rollie Krewson, Connie Peterson, Matt Brooks, Anney Fresh, Heather Asch and Tom Newby!) Audinces loved the show and it ran for two Christmas seasons at the Goodspeed Opera House in East Haddam, CT, a theater that seemed to be designed specifically for Emmet and the gang.

After it's second year, it was uncertain if I'd get to revisit that wonderful world we all created. There was an intense amount of joy and love poured into every aspect of that show. Such attention to detail and dedication to remaining faithful to the visions of both the Hobbans and Jim Henson. It was a wonderful experience to have been a part of that project but I'd assumed it's time had come and gone.

Then in November of this year, I received an email from a fellow Emmet puppeteer, James Silson, informing me that Christopher was attempting to stage a reunion concert with the cast at 54 Below in Manhattan in December. I did a little research into flights and prepared to clinch my teeth at what would surely be an impossible ticket price. I was amazed to find a cheap flight on American Airlines: a Christmas miracle! I booked the flight faster than you could say "ain't no hole in the washtub."

Honestly, I wasn't looking forward to Christmas. I've started referring to 2015 as my "3-D" year: Divorce from a very brief marriage; the Death of one of my best friends and mentor of 20 years, Terry Snyder; and Depression from a general feeling of powerlessness over these and some other circumstances that presented themselves this year. I was bracing myself to just get through the holidays, hopefully unscathed, and pray for a better year in 2016.

But because of  this overnight adventure in New York and reuniting with my "Emmet Otter" family, I experienced a Christmas miracle. This is the true power of any good Muppet Christmas special. I know it sounds hokey, but being around those exceptionally talented people, those characters and puppets and their heartwarming story and songs were exactly what I needed.

For the musical, Paul Williams wrote a beautiful ballad for Pa Otter, appearing as a ghost, to sing to Ma when she is experiencing a moment of self-doubt and defeat. In the song, "Alice, Keep Dreaming," he tells her, "There's hope in the power of love." As I sang them, those lyrics felt like Paul's words to me. The song developed such a tremendously deeper meaning for me. I needed those words and that encouragement.

Paul also wrote a song for a quartet of squirrel puppets that also contained a special message for me. "Trust the Branch" has a chorus that goes:

Ya gotta trust the branch you land on
trust it to bend but not break.
Sometimes in life you gotta just jump in
that's the chance that you take
There's no way of knowing how your story will end
but it's gotta be told from the start.
Trust that you'll find some peace of mind
and you'll be home when you follow your heart.

It was also a joy to reconnect with a few friends that I had a short time to see. It made me realize that I'm overdue for a longer visit to NYC.

Thank you, Emmet Otter gang for the best Christmas gift I could have ever asked for.

When I returned to Atlanta, I received a message from my friend Rebecca, who is a children's librarian. On a recent trip to Asheville, NC, she saw a gingerbread house contest and just had to share the second place winner's entry with me. It's pretty incredible. I'm glad whomever made it fared better than Ma and Emmet at the Waterville talent contest! 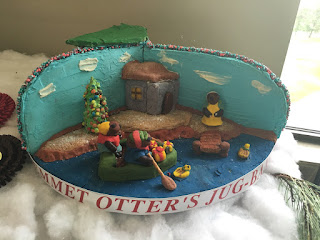 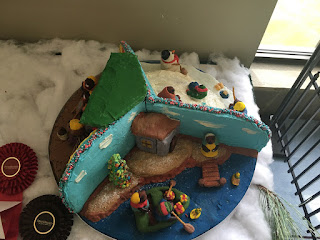 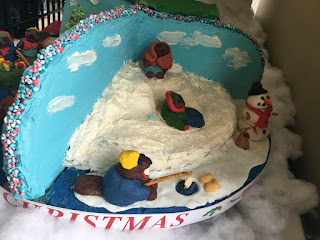 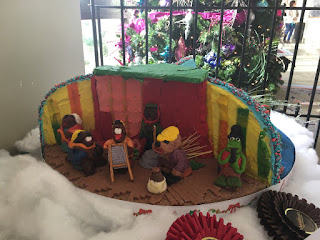 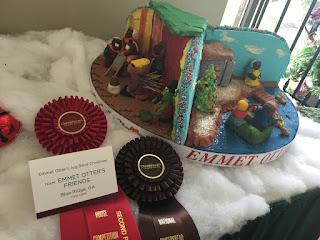 Thanks, Christopher, Paul, Jim, Jerry (Nelson & Juhl!), Heather, Jane, and the whole Emmet Family.Until next we meet where "the river meets the sea.." 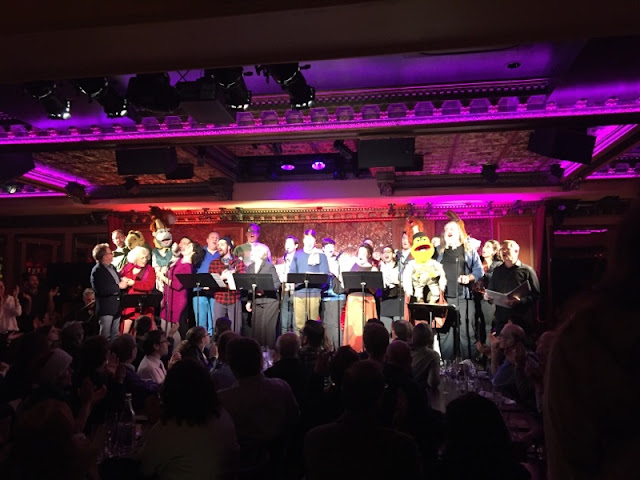