Here's a little music video I created along with the help of some Atlanta puppeteers and Portfolio Center film students. Andrea Dorsey contacted me in January about the possibility of creating a music video for one of my songs. Then I told her I was also a puppeteer. Click on the link to see the results.

Of all the songs on my upcoming album, "A Year and Some Change," this one seemed to lend itself the best to being done with puppets. I wanted to keep things as simple as possible. The video was shot in one pass (after 18 takes) with a mostly stationary camera, the way the early Muppet and Sesame Street bits were done. And instead of intruding chickens or penguins, I've got raindrops. Its really a big homage to my Muppet performer heroes.

I should also credit Will Robertson on bass and Matt Phillips on cornet and banjo-mandolin. That's his fancy, clunky strumming you hear. When we recording that part as an overdub, I don't think Matt expected us to keep that take. But it was so hilarious and all over the place, we had to keep it. And its perfect for the video.

Enjoy!
Posted by Puppetsandbanjos at 6:53 PM No comments:

Coming to a Ford in the Road 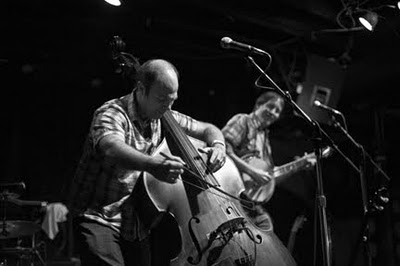 As I mentioned in the previous blog, Banjolicious opened for Sallie Ford and the Sound Outside on Sunday. OK Productions booked us for this gig after seeing us open for Danny Barnes, one of my banjo heroes, last May. However, I initially thought we got booked because Sallie's dad, Hobey Ford, is a puppeteer friend of mine. Just a neat little coincidence. 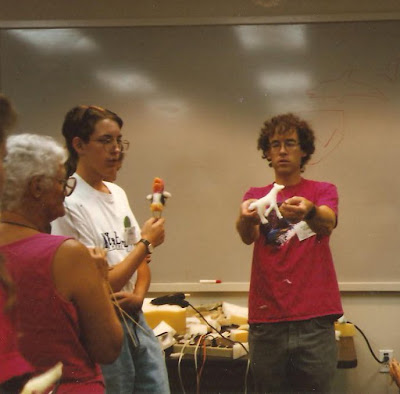 Taking Hobey's foam carving workshop at the POA Festival in '92 in Charleston, SC

I met Hobey when I went to my first Puppeteers of America Festival in 1992 in Charleston, SC. He was one of a few solo puppeteers I remember being blown away by. Terry Snyder and Drew Allison (Grey Seal Puppets) were also on that list. I was so impressed that these guys did everything: built their own puppets, wrote their own shows and performed them. To a kid from south Alabama with no friends with whom to share his interest in puppetry, this was a revelation. You could do this work by yourself. Today, those puppeteers whom I admired so much are now friends and colleagues.
If you're curious about the marvelous work of these artists, just follow the links:
http://www.sallieford.com/
http://www.hobeyford.com/
http://www.greysealpuppets.com/


Posted by Puppetsandbanjos at 3:48 PM No comments: 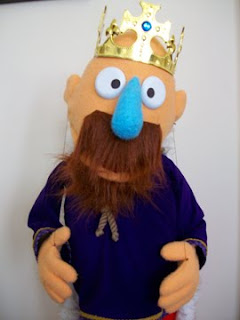 Its been a busy week around here. "When it rains, it pours" seems to be a reocurring theme this year. Earlier in the week, I had my last rehearsals for "Puppets Have Feelings, Too," a new show I'm creating for Young Audiences under the guidance of YA directors Gregg Johnson and Scott Depoy.

During a YA conference in January, I had the idea to create a show that would teach children about developing puppet characters and emotion recognition. Inspired by Jim Henson's Anything Muppets (or What-Nots) I created a puppet character for which children in the audience can select and arrange different facial features. Subsequently, this changes the puppet's character and emotion. Its a very interactive show and more educational than any other show I've created. Fortunately, there's enough art and humor so the kids don't realize they're learning something.

There are a number of facial combinations that are possible with King Rhubarb the 12th. Students are able to change his eyes, nose and facial hair to create an entirely new King character. 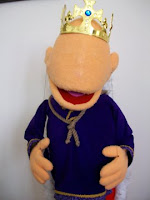 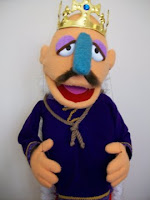 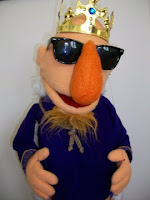 The offical "roll-out" for "Puppets Have Feelings, Too" was on Thursday at the Walker School in Marietta for an audience of 4th graders. Their initial response was less than enthusiastic when I walked out playing my banjo to introduce the show. You could practically hear their eyes rolling. But once the puppet portion of the show was underway, their attitude changed. As they were leaving I heard several students say, "That show was AWESOME!" 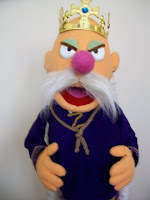 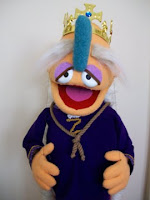 I don't want to give away any secrets as to how these features are changed, but I'll tell you its not velcro, tape or pins. Thanks to my good buddy, Matt Phillips for solving this difficult challenge!

On Friday, I drove to Calera, Alabama, where I had shows on Saturday for an Alabama Power employee appreciation celebration. Set up like a mini-carnival, there were rides, bands, consession stands, inflatable attractions, pony rides, a petting zoo and a stage for children's entertainment. Parking was at such a distance away from the event, families were ferried over in Trailways busses. Fortunately, staff were allowed to park close to the event which made loading and unloading relatively easy.

I shared the stage with a magician and the reptile-lady who had coolers full of pythons and rattlesnakes. It was then I realized that we are what became of vaudeville. Now relegated to children's entertainment.

I'm one of those people who never carries a lot of cash in my wallet. So, for times when cash is the only methold of payment option, lack of planning or an ATM in close proximity can result in a hungry puppeteer. With no cash in my wallet, I was looking at tables full of bar-b-que and funnel cake stands with drool coming out of my mouth. Several hours later, I had a realization: this was a company employee event. Surely the company would not be charging its employees for any of this. Sure enough, it was all free. No more hungry puppeteer.

Sunday night I had the pleasure of playing with my buddy and upright bassist, Will Robertson at the EARL in East Atlanta. Promoted by OK Productions, we were the opening act for Sallie Ford and the Sound Outside. Will and I haven't played together for a good long while now, but like any good friendship, it doesn't take us long to pick up where we left off. We played a lot of tunes off my upcoming album, "A Year and Some Change," which should be available in a couple of weeks. I'll keep you posted. 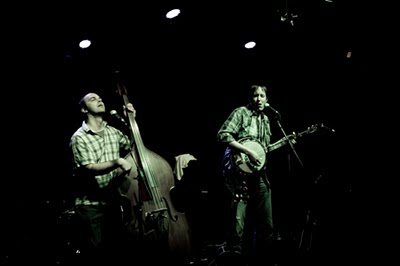 Photo by Richard Parsons
Posted by Puppetsandbanjos at 2:56 PM 1 comment: